ACES researchers are leading the way in creating next generation diagnostic tools with the development of a novel drug delivery approach using electrofluidics. 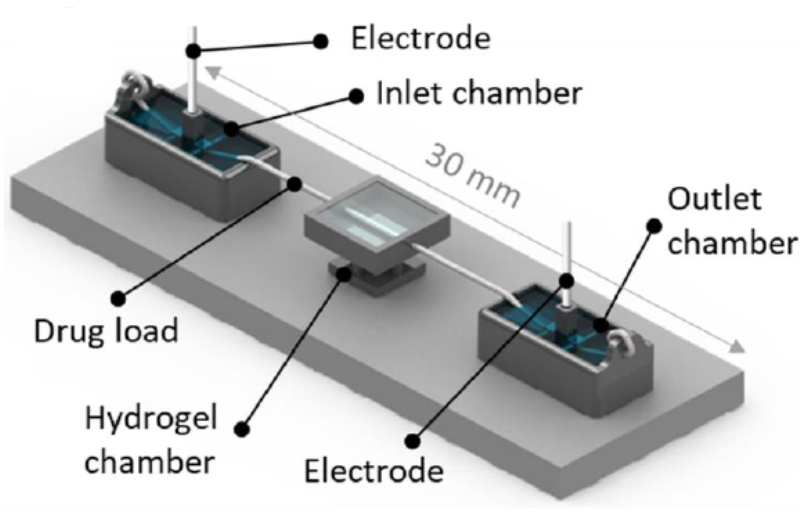 The team, comprised of members from ACES University of Tasmania (UTAS) and University of Wollongong (UOW) nodes, has demonstrated for the first time a new approach to control the delivery of drugs into soft tissue models, which was recently published in Scientific Reports.

The method uses electrofluidics (the precise control and manipulation of fluids at the microscale using an external electric field) to control the delivery of biomolecules via a surgical suture into and throughout a hydrogel to produce the desired effect (e.g. stimulating or suppressing some activity within the cells).

ACES Electrofluidics and Diagnostics Theme Leader Professor Brett Paull from the ACES UTAS node said the paper was the result of a number of years of collaboration across the Centre.

“We’ve been doing quite a bit of work in recent years on trying to use fibres to deliver, concentrate or isolate various targets within analytical diagnostic applications. Threads and textiles have gained considerable attention recently for microfluidics and bio-sensor applications, because of their mechanical strength and ability to facilitate and direct fluid movement,” Brett said.

“Because we work in ACES, where we have quite a nice mix of analytical chemists, materials chemists, electrochemists and biochemists, it came about that we might be able to use fibres through three-dimensional (3D) hydrogels to deliver bioactives (things that cause a response in the biological system).”

Hydrogels, a network of polymer chains, can be produced to mimic the mechanical properties of a variety of soft tissues, including neural tissue, vascularisation, cartilage, bone, skin, skeletal muscle, cardio, liver, and kidney.

In this proof of concept work, the team controlled the delivery of anti-inflammatory drugs into a hydrogel, which represented the biological system, to investigate aspects of how the delivery approach could work with live cell cultures. The process saw the drug spread across the full 3D space of the gel, and after two hours of electrical stimulation, over 80 per cent of the drug was still retained, even under applied conditions. 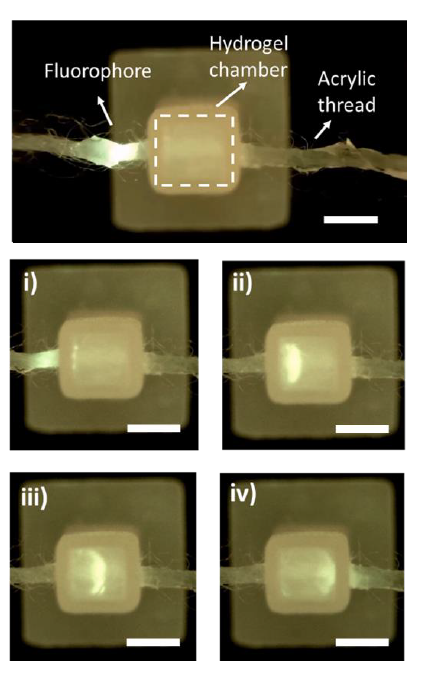 ACES Director Professor Gordon Wallace said there could be a number of advantages afforded by this system, including being able to turn on and off delivery when needed and controlling the delivery rate.

“This work showed you could use commonly employed sutures as the conduit to deliver anti-inflammatory drugs, by implementing a novel method of control of fluid movement,” Gordon said.

“Multiple drugs could be delivered as required over the time sequence that delivers optimal outcomes. This could be applied whenever sutures are commonly used in treating medical conditions.”

Brett said the team was now looking at what comes next for the project after the proof of concept work.

“This is just the beginning of what we see as an exciting possibility for the future that could possibly be taken in vivo,” Brett said.

“It’s always good to see work that you have faith in, that you think is novel and has real application, finally get recognition. This project has been a real collaborative effort, and with so many experiments and revisions completed across the team in Tasmania and Wollongong, it’s a great feeling to get something out of that collective work.

“The next logical phase is to work towards some actual application of that technology. There’s a great number of opportunities there, and we’re already engaging across the ACES network to investigate our next steps.”

The team is now engaging in a number of in vitro projects to further their research in this area, including looking at how this technology can be extended to multiplexed platforms for biomolecules delivery, and introducing living cells into the platform to determine their compatibility with this mode of bioactive delivery.