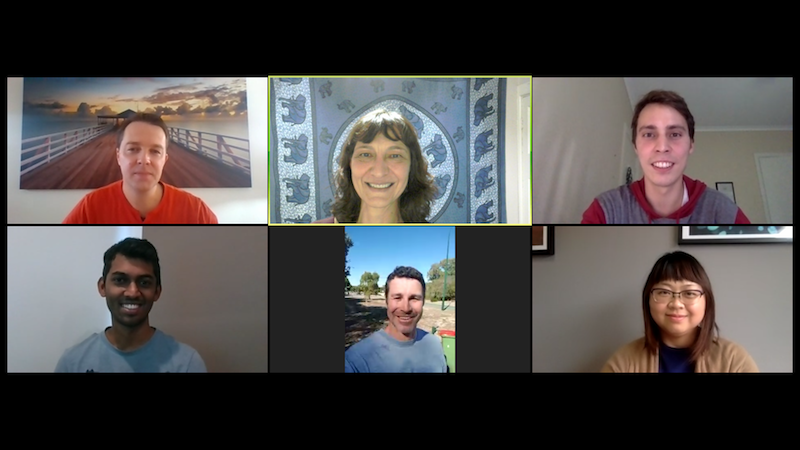 A ‘social distancing’ group shot of some of the researchers involved in the new paper in Nature Materials, courtesy of Zoom!

Professor Maria Forsyth said the work presents an important breakthrough in the field, paving the way for a next generation of high energy density batteries.

“A sustainable energy future must include the innovative use of clean electricity to power our lives, which will require new ways to safely store energy in a highly efficient manner,” Maria said.

“To date, high energy density storage technology relies on rechargeable batteries that use reactive metals such as lithium and sodium, however there are global challenges with this technology including electrochemical reliability and safety concerns associated with the use of those reactive metals.

“Our work is very significant as it highlights for the first time how and why an ideal combination of sodium metal anode and super concentrated ionic liquids can contribute to superior batteries safely.”

“Our research is quite exciting as we have found these high performing ionic liquids which contain a high salt concentration contribute to battery stability, which opposes conventional solute theory where a highly concentrated solution often leads to reduced conductivity and performance,” Dmitrii said.

“Super concentrated ionic liquid electrolytes have attracted global interest because of their ability to efficiently cycle reactive metals such as lithium and sodium as part of key breakthrough technologies for high capacity batteries beyond lithium-ion technology. However, previously no one has explained why this material leads to better cycling performance.”

Modelling work as part of the research showed that at a high salt concentration enables the formation of a molten-salt type structure in the innermost layer of the electrode, and by applying high-voltage conditioning this can be further controlled to eliminate molecular species that would react unfavourably at the electrode.

“Using molecular simulations coupled with experimental design, this is the first time we’ve been able to explain this excellent behaviour,” Fangfang said.

“We believe this work will be of great significance to battery manufacturers because it guides the feasibility of using a combination of smart electrolyte design and conditioning to develop high performance batteries into the future.”

The research also has important implications for high energy density lithium metal anodes, for use in next generation batteries to sustainably power transportation and clean energy for homes.

Current development has been constrained by the type of electrolytes commonly used to make these devices. Organic solvents are typically used as electrolytes in batteries, which are highly flammable. These electrolytes can also cause something called dendrite formation (a growth of lithium metal inside the battery) due to frequent charging and discharging of the battery. Researchers around the world are trying to replace these electrolytes with ionic liquid-based electrolytes, which have excellent electrochemical stability and low flammability.

The ACES team’s newly released paper will assist researchers on this mission as they look to increase the battery life, energy density and safety of state-of-the-art lithium batteries.