With the help of the ACES and Australian National Fabrication Facility (ANFF) partnership, the Translational Research Initiative for Cell Engineering and Printing (TRICEP) – launched in 2018 – has been working to meet a range of clinical challenges. This partnership has enabled TRICEP to bring about real advances to tackle significant medical challenges. 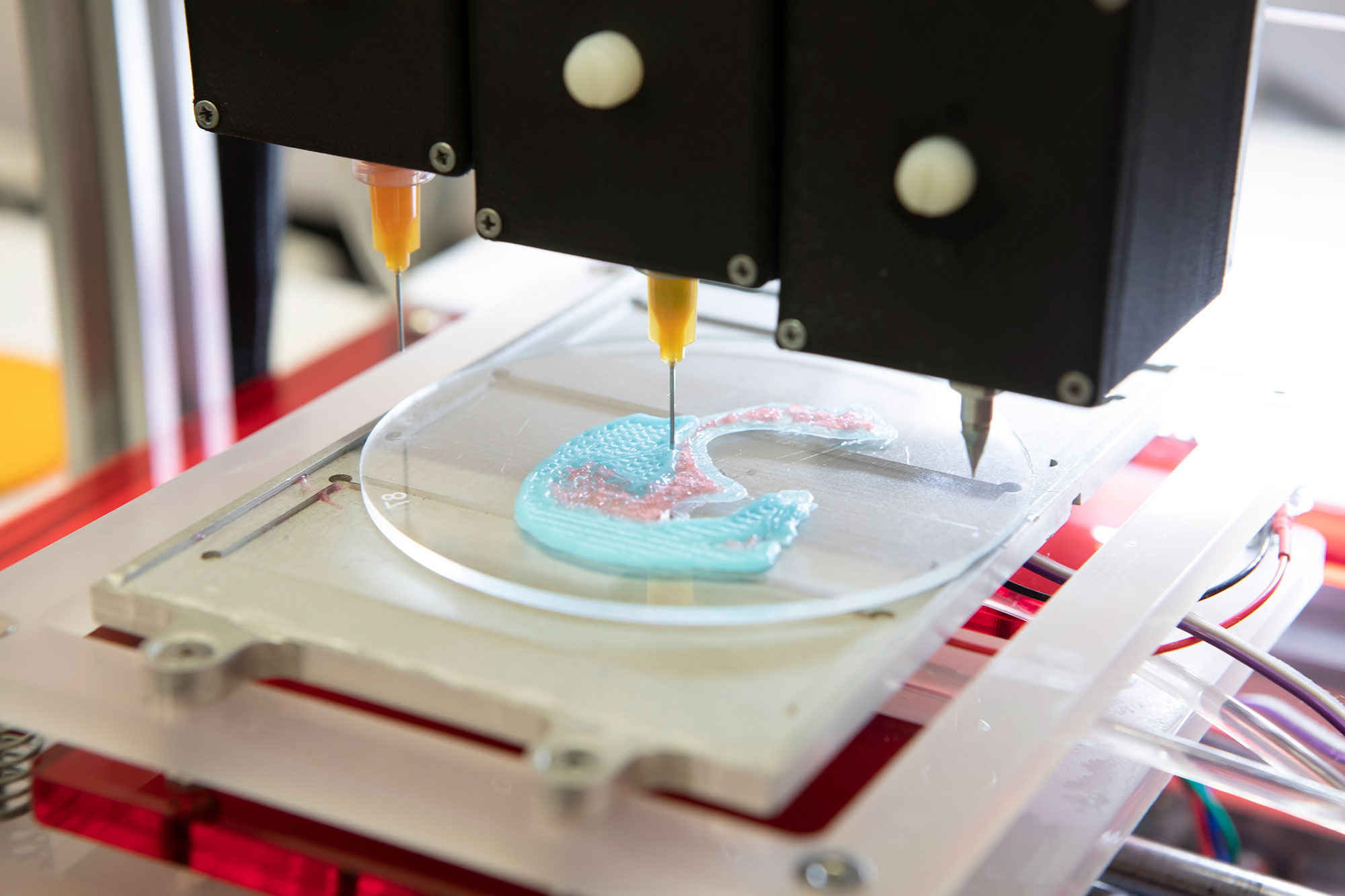 After featuring Seaweed Bioinks last week, we continue to highlight a number of other TRICEP initiates, this time taking a closer look at 3D Alek.

The name 3D Alek was given to a tri-head extrusion based printing system specifically developed for the ear cartilage regeneration project led by Dr Payal Mukherjee from the Sydney Royal Prince Alfred Hospital (RPA) and ACES and TRICEP Director Prof Gordon Wallace.

3D Alek is a customised multi-materials biofabrication 3D printer that utilises a specialised bioink developed and built by ACES researchers at the University of Wollongong (UOW) and the Australian National Fabrication Facility (ANFF) to assist in the regeneration of cartilage for use in reconstructive ear surgery.

The outer ear is an extremely complex 3D shape in length, breadth, height and also projection from the skull. Sometimes it is deformed by congenital disease such as microtia or due to trauma or destructive diseases such as skin cancer needing segmental resection of the ear cartilage. Current results of reconstructive surgery are poor, need multiple stages, seldom give symmetric results to the other ear and also associated with graft and donor site complications. 3D Alek aims to assist in the regeneration of cartilage for use in reconstructive ear surgery.

“Treatment of this particular ear deformity is demanding because the outer ear is an extremely complex 3D shape, not only in length and breadth, but also in height and projection from the skull.

“This is where bioprinting is an extremely exciting avenue, as it allows an ear graft to be designed and customised to the patient’s own face using the patient’s own natural tissue, resulting in reduced operating time and improve cosmetic outcome, and avoids the current complication of requiring a donor site for cartilage, usually from the patient’s rib cage.”

Bioprinting is a novel solution to address these challenges allowing patient specific implants using their own stem cells. Bioprinting eliminates the concern for shape, size mismatch while also allowing stem cells, growth factors to be incorporated into the design with ease.

Though microtia can occur as an isolated anomaly or part of a syndrome, majority of cases (77-93%) are unilateral with 60% involvement of the right ear. For bilateral cases, the approach is to take the MRI/CT scan of the patient and create a printable stl file from the contralateral ear. Then, by using a variety of bioinks, we can print an ear scaffold using stem cells or patient-specific cartilage cells that will be implanted. 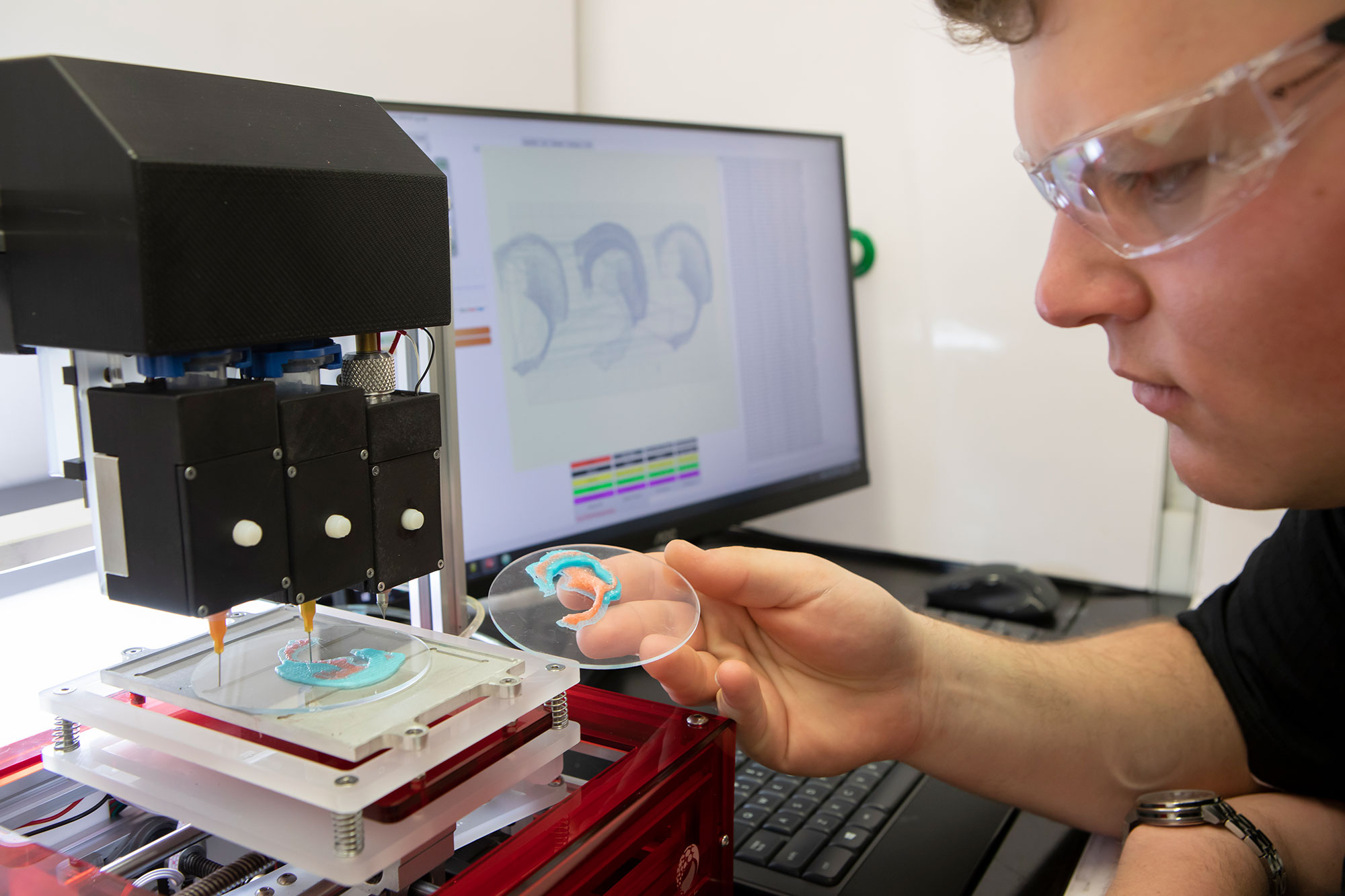 “Bioprinting using 3D Alek could be a real life-changing, and even, life-saving process in fabricating cartilage, repairing damaged skins and bones.

This is a clinical collaborative project with Dr Payal Mukherjee from RPA. The team at UOW is made up of ACES and TRICEP Director Prof Gordon Wallace, ACES Associate Investigator Dr Zhilian Yue and ANFF Research Fellow Dr Johnson Chung – with assistance from the TRICEP team for hardware and software development.

“We have brought together disparate skills from many disciplines to tackle this challenge. In the course of this work we are learning how to most effectively and efficiently take 3D Alek and associated printing protocols from our translational facility (TRICEP) into the clinical environment.” 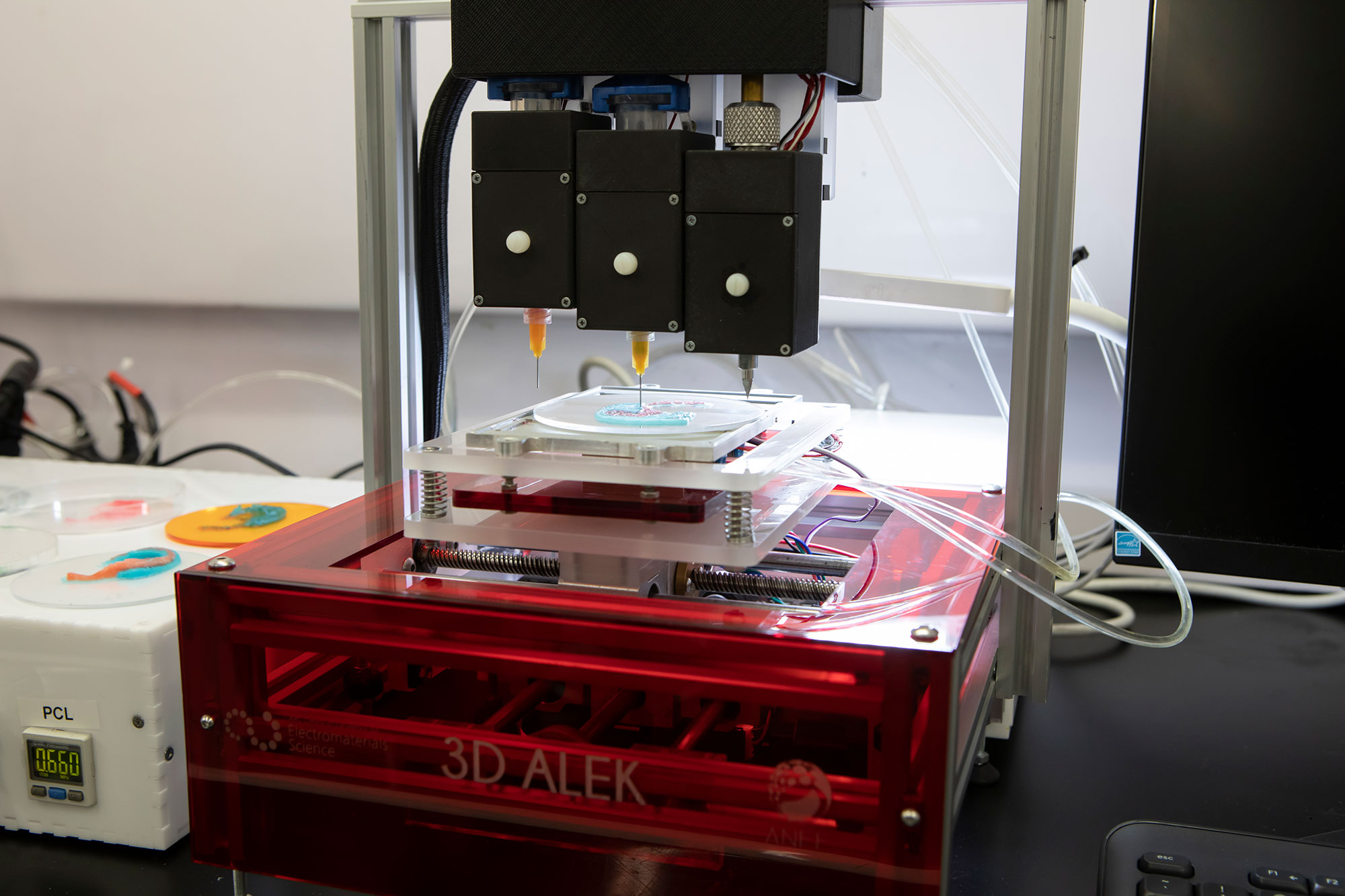 How has it progressed since its development?

Significant progress has been made to printer development, bioink formulation, printing protocols and cell studies. The printer 3D Alek, is at the final stage of completion with the in-built LED light source test. Following that, training will be provided to users prior to delivery to RPA Hospital where a dedicated bioprinting facility was established.

For bio-ink formulation and printing protocol, we have designed an ear scaffold using three materials, including cell-laden hydrogen using in-house synthesised at TRICEP (GelMA/HAMA), structural support layer using thermoplastic polymers and, lastly, a hydrogel-based sacrificial layer. The scaffold was printed via a “hybrid” printing method recently published that prints the cell layers “in-between” each polymer strand. This allows the final construct to be handled easily by surgeons during implantation and can protect the stem cells during differentiation and maturation stages.

The versatility of 3D Alek and the user interface also allows the scaffold design to incorporate multiple line spacing and orientation that divides the scaffold into different regions, which has different stiffness and bending properties. Stem cells have successfully differentiated into chondrocytes based on the bio-ink formulation we have tested and a preliminary six months study in sheep showed that hybrid scaffolds result in more tissue ingrowth compared to pristine scaffolds with one material.

The future for 3D Alek?