ACES researcher Dr Justin Bourke has had his fair share of experience throughout his career in science, picking up a wide skill set along the way to lead him on a path to become an ACES Research Fellow with the University of Melbourne and a board member for Women in STEMM Australia. 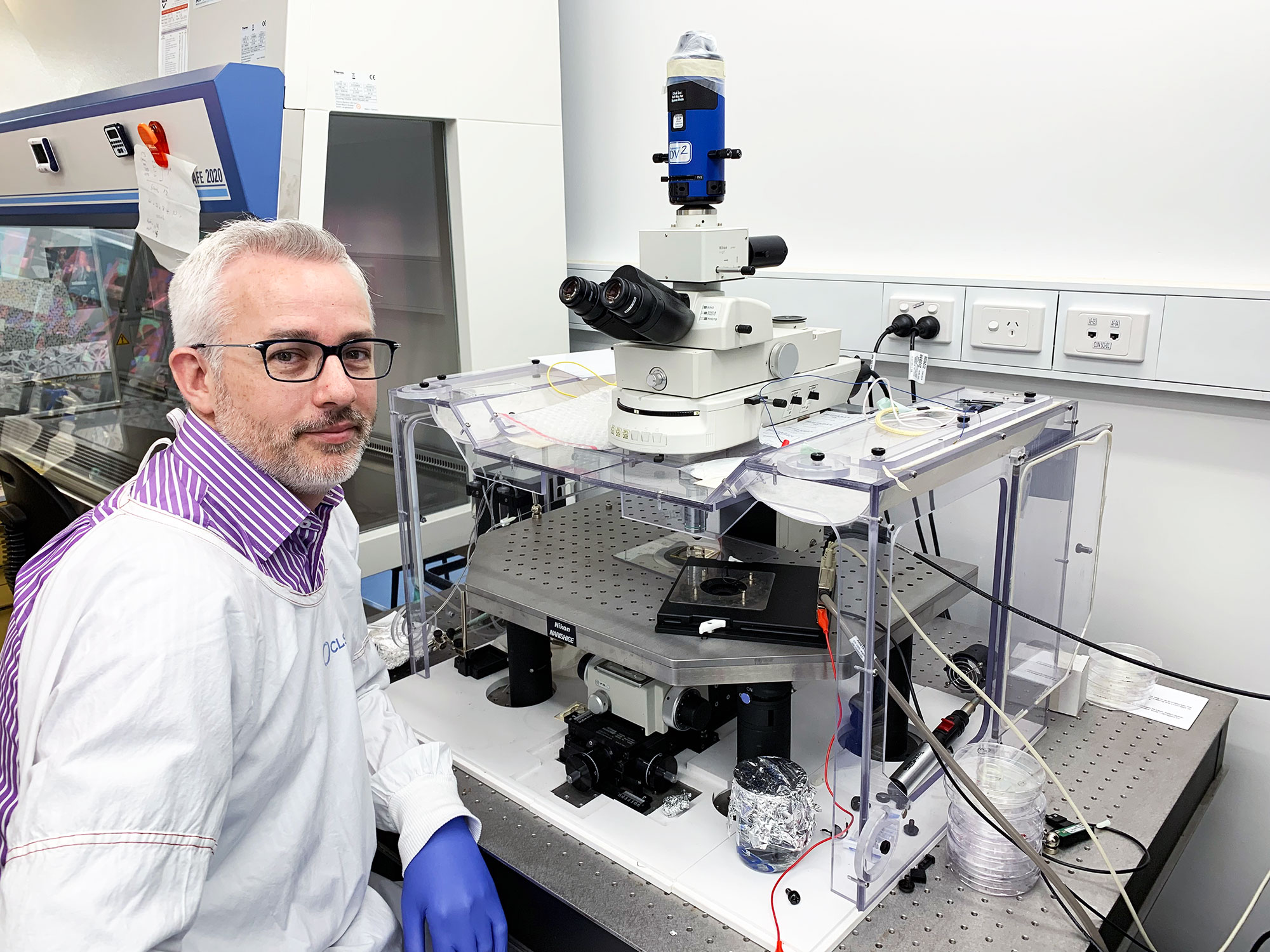 With a background in engineering and physiology, Dr Bourke found his way to St Vincent’s Hospital Melbourne to work in electrophysiology after completing his PhD at Monash University and is now based in Wollongong to further his work at ACES headquarters as a Visiting Fellow.

We caught up with Dr Bourke to find out more about his research and its progress, how he came to join ACES, his involvement with Women in STEMM Australia and more.

Can you tell me a bit about yourself and what you do as part of the University of Melbourne?

I’m a Research Fellow within ACES for the University of Melbourne. However, I’m currently based in Wollongong at ACES headquarters. My main research project involves biomaterial-based 3D neural cultures and electrophysiology. I am looking at the cellular activity of neural networks that form in biomaterial constructs. With that, we’re trying to develop a clinical tool for epilepsy patients to figure out what drug is going to be best for each particular patient. My other project is around tissue engineering and electrophysiology studies for control of prosthetic limbs. Developing a clinical tool from 3D neural cultures for selecting drugs for epilepsy patients, however, is my main focus.

Where are you up to with the project?

We’ve managed to get the 3D cultures up and running and have been able to record the electrical activity from those cultures, and have characterised what those networks look like. We’ve shown for the first time that within 3D cultures we have neural networks that function in the same way as they do in the brain. We’ve started inducing epilepsy in these to see how function changes and have seen some very promising results that we now want to build upon.

What was your background before ACES?

I did an engineering degree in electrical and computing systems as well as a science degree in physiology. I completed both at Monash University and then went on and worked there in the physiology department for about 11 years as a Research Assistant. I then did a PhD in electrophysiology and biomaterials, also at Monash.

After finishing my PhD, I ended up with ACES, working at St Vincent’s Hospital Melbourne through Melbourne University. More recently, I’ve made the move up to the University of Wollongong as a Visiting Research Fellow.

How long have you been a part of ACES then?

I’ve been with ACES for about five years now. As I was nearing the end of my PhD, I spoke to a few people around Melbourne about potential positions, and there was one group in particular who was advertising for a research assistant. I got in contact with them to see if they could extend it to a research fellow post-doc position but unfortunately they didn’t have enough funding to do so at the time.

However, they suggested I get in contact with Prof Mark Cook, head of neurology at the University of Melbourne and St Vincent’s, who is of course an ACES Chief Investigator as well. I did that and it turned out that they had just been given some money for electrophysiology. It was perfect timing and I jumped straight on board.

You’re also involved with Women in STEMM Australia on the board of directors. How did that come about?

I’ve seen a lot of people leave academia as it is not an equally attractive career for everyone. Achieving equity for all who enter STEMM fields is critical, not just in academia, and it will likely require a cultural shift within many organisations. I went to a Women in STEMM conference a few years ago and found it really insightful. I followed up and spoke to a few people already involved in the organisation, expressing my interest, and was formally invited to join the board of directors.

Until recently, I was also involved in the ACES Equity and Diversity Committee. We’ve been working on the ACES code of conduct and have been mapping out all of the equity and diversity stats within ACES. The committee is trying to see what we can do at the upcoming conferences to improve on our performance, whilst also making sure people are aware of the numbers and the diversity on other committees within ACES as well.

How have you seen that progress?

There have been a few things that have had a positive impact. One of them is really simple and that’s providing these gender stats to our committees to look at and be aware of. Everything that goes to the executive committee now has a breakdown of numbers of males and females involved. This makes people think about it and take action if the numbers go way out.

I was actually on the executive committee recently as an observer and I could see how implementing these stats really got our members of ACES talking and thinking about diversity on various panels and committees.

What would be your biggest career achievement thus far?

I think the one thing I’ve been most excited about and proud of has been the recordings we’ve been able to attain from our 3D cultures. We’ve been able to get some really exciting results and have shown that our neural cultures are producing networks that function in a very similar way to those in the brain, which is very different to the function seen in traditional 2D cultured networks. With these results, we are able to move forward in what we can actually use these 3D cultures for. It’s all pretty exciting. We have a way to go but we have a really solid starting point.

If you weren’t in research what would you be doing?

I never actually intended to go into research. I did work experience way back in high school at a hospital and thought of maybe going down the path of medicine. I ended up in the radiography department and was far more interested in the equipment and all the various methods involved and how they were designed. I also really enjoyed analysing the data. This gave me a really good idea of where I wanted to be, which is why I went on to do an engineering degree and then kind of just fell into a research position and further study, leading to where I find myself today.

What advice would you give to anyone else thinking about a career in research?

What worked well for me was picking up a set of skills that others don’t have. There’s a lot of funding opportunities for multidisciplinary research so having a wide skill set or bringing two fields together can be very helpful. I’d also say find something that really interests you. The most important piece of advice that I could give though is to simply be kind to those around you.

Thanks for your time, Justin.