The ARC Centre of Excellence for Electromaterials Science (ACES) has taken out the coveted Frontiers Research Award at the 2019 Research Australia Health and Medical Research Awards. 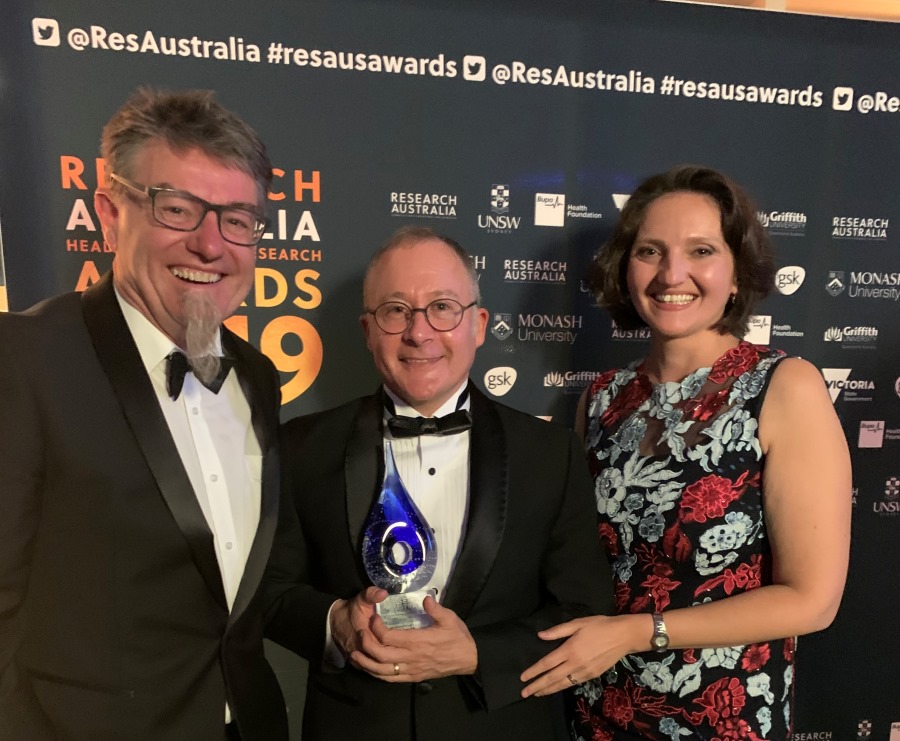 The project team led by ACES Chief Investigator Associate Professor Jeremy Crook, ACES Director Professor Gordon Wallace and ACES Research Fellow Dr Eva Tomaskovic-Crook from the University of Wollongong, were acknowledged for their work in creating novel ways to use human stem cells to assist in regenerative tissue engineering research for the treatment of diseases. The group is investigating the use of electrical stimulation to influence cell behaviour as a way to treat traumatic brain injuries and neurological disorders such as epilepsy and Parkinson’s disease.

A/Prof Jeremy Crook, who is Chief Investigator for the ACES Synthetic Biosystems theme, said the team was delighted to be acknowledged for their innovative work and for pushing the boundaries within health and medical research.

“To have our work recognised by Research Australia in the company of other such talented researchers is an honour,” Jeremy said.

“We can see such potential for our research to treat neurological disorders, as well as provide donor tissues for vital replacement therapies following trauma and disease. Our world-first new platform brings together several cutting-edge technologies and integrates biologically relevant human cell lines with advanced techniques for 3D tissues engineering and 3D electrical stimulation that better represents human cell growth and tissue inside the human body.”

ACES Director Professor Gordon Wallace said the team’s success was supported by their international research partners who brought critical skills and a breadth of knowledge necessary for success.

“This work is an excellent example of the importance of global collaboration in delivering efficient, effective and high impact advances in research and innovation,” Gordon said.

“As part of this project, we had the opportunity to work with renowned researchers from the University of Auckland in New Zealand and Tampere University of Technology in Finland. Building these links enables the realisation of exciting new technologies and platforms that can have significant positive impacts in our communities.”

The Frontiers Research Award category recognises transformative research projects that extend existing knowledge and understandings within health and medical research that will enable Australia’s health system to position itself as a global leader.