Len Snowdon has a dancing arm, an activities arm and an everyday arm. He also has an everyday leg. The 54-year-old’s collection of parts is one of necessity, after he lost his arm, leg and hip in a horrific workplace train accident twenty four years ago. 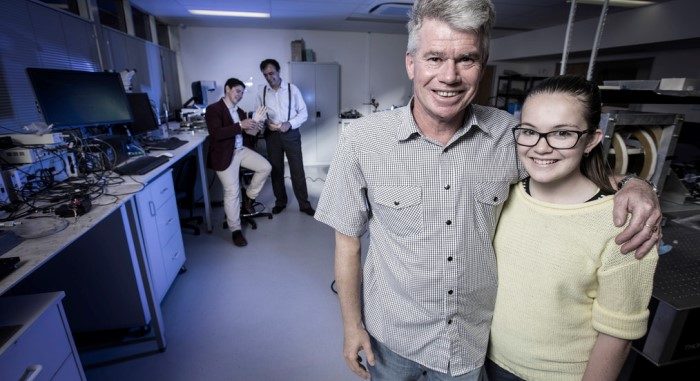 “I was so grateful I survived,” said Len. “I think of it as just a crap day in an otherwise wonderful life.”

His positivity and collection of prosthetics has kept him connected and involved in life, and provided a bridge to the small gestures and activities it’s so easy to take for granted, like being able to hold his wife Carol, or later, holding his new born daughters, or picking them up after a childhood fall.

They also opened up a new world to him, and with the support of his family, friends, and then employer he retrained and had a long and fulfilling career first in human resources and then safety management. He also found freedom in learning to surf, dancing and helping others with a disability.

“At first I was just happy to be able to sit up and clean my teeth, but as the years went by I’ve had more opportunities to challenge myself and I’ve taken on board most of them,” he said.

A child’s fascination with machines could hold the key

At about the same time that Len was waking up in a hospital bed and realising he was alive, a young Rahim Mutlu from Bursa, Turkey, was discovering a love of machines.

He liked to pull household items apart and find out how they worked, and he used this information to come up with some creative solutions for childhood problems, like getting to school on time.

“When I was going to primary school, I didn’t have an alarm clock. I modified a simple mechanical table clock to turn my FM radio and cassette player on in the mornings,” Rahim said.

At the time, alarm radios weren’t really a thing, so it was an out-there solution for a kid to dream up.

“Using a couple of wires hooked up on the clock hands and an enclosure made of clear plastic to prevent possible injuries from electric shock, my simple FM radio was turned into an alarm radio.”

Rahim has since followed his obsession with machines and robots down a more advanced path.

In 2015 he joined ACES as an Associate Research Fellow, and is part of a team leading the charge on the development of a soft robotic hand for the many thousands of people worldwide who were born without one, or had it removed as a result of trauma or illness. If successful, the principles of his hand could underpin the development of other soft robotic limbs, like legs, feet and full arms.

Len Snowdon can attest to the isolation amputees feel.

“You can feel sad for the loss of the limb, fear the unknown, and be really unsure about how life can continue,” he said.

Currently, patients who have lost a hand have a number of prosthetic options; they can choose to wear a cosmetic hand with no function; a conventional prosthetic that relies on a harness system, controlled by gross motor body movements to move a hook or hand; or for those with the resources, a battery powered robotic hand which offers a greater range of movement and more grip options.

Len has a version of all three, part of a full arm prosthesis.

“I have my dancing arm—this one is purely cosmetic with no function. It has fingers, and goes all the way up to my shoulder, and it’s light. When I’m dancing I can work up enough momentum for it to wave around—you can’t tell the difference between me and the next bloke,” he said.

“My activities arm is the old fashioned captain hook claw,” he said.

“When I first got this one it was wonderful because it gave me an opportunity to go fishing again—I dearly loved that and had been missing it,” he said.

Len’s ‘everyday’ arm is a state-of-the-art electronic prosthesis styled in the same fashion as his other arm, complete with matching skin tone, hair and mirror image freckles. The device, powered by a motor, battery and computer stored in the top half of his arm, gives him movement from the elbow down.  This includes a number of grip options, with fingers moving as one against the thumb.

“My everyday arm has electro sensors attached to muscles in my shoulder and neck,” he said.

“By moving different muscles, I can activate different tasks. It’s one task at a time, so if you can imagine, I move my hand towards a cup, then I expand my triceps muscle and when I hear a beep, I am able to grip the item.”

Len loves his collection of arms, and really appreciates the independence and freedom they have given him over the years, but he concedes they have limitations and is excited about the prospect of Rahim’s soft robotic hand which could potentially combine the functions of all three of his arms in one lightweight, low-cost design.

The secret, says Rahim, is combining new, intelligent materials that can sense and respond to stimuli with 3D printing techniques to create an all-in-one, soft and natural-looking prosthetic hand.

Rahim explains that conventional robotic prosthetics are made of many rigid components that require lots of people-power to make and assemble them, leading to higher costs. Rahim’s version has fewer parts—ideally one structure with all the functions built-in—using soft, smart materials.

“It is important to have less fabrication steps to lower the cost. However, more importantly, a monolithic soft robotic hand works as compliantly as our biological limbs do,” Rahim said.

“The main challenge of developing a robotic prosthetic is replacing current functional units of the device such as actuation and sensing. Current actuation methods for example use noisy, bulky electric motors to generate finger—and wrist in some—movements,” Rahim said.

“Our approach has no gears and motors to create the hand gestures—the smart materials will actuate the hand silently.”

Rahim’s contribution to the project, led by soft robotics royalty Prof Gursel Alici (pictured below) from ACES at the University of Wollongong, is to design, optimise and 3D print the soft robotic hand structure.

He is also exploring the use of materials which can help detect the positioning of the fingers, which can all move individually, and is planning to tailor the same material to give haptic feedback such as touch, pressure, vibration and temperature. With the combination of two sensors, the user will not only be able to grasp an object but also have a sense of its size, texture and temperature.

The team has already proven that it’s possible.

“With the help of Dr Vitor Sencadas, one of my colleagues, we developed soft sensors directly on the 3D printed soft robotic finger which is also one-piece and requires no assembly,” he said.

“Those sensors can give feedback of the soft robotic finger motions in order to control their position and also help to identify the shape of the objects grasped.”

“A person using this device should be able to close their eyes, and guess what they are grasping with their soft robotic hand,” he said.

The next step for the research team is to employ smart materials to tailor soft actuators which will be embedded in the hand as a muscular system, before moving onto the human-prosthesis interface.

Len said he is looking forward to the day when he has one arm to help him carry out his tasks.

“I think Dr Mutlu is a very clever and caring person and I wish him all the best in his work on this new kind of prosthesis,” he said.

Photos courtesy of University of Wollongong.