Professor Gordon Wallace, Director of the ARC Centre of Excellence for Electromaterials Science (ACES) at the University of Wollongong (UOW), has won the prestigious CSIRO Eureka Prize for Leadership in Innovation and Science. 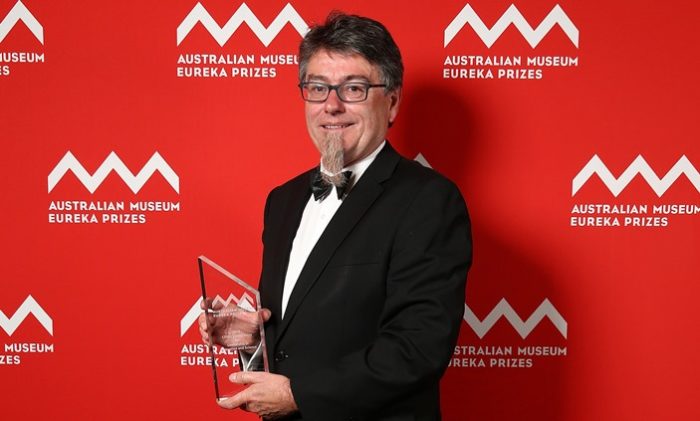 Recognised for his work as an internationally renowned researcher in the field of electromaterials science, Professor Wallace was commended at the Eureka Prize gala dinner in Sydney, for his cultivation of a research vision in the area of ‘intelligent polymers.’

The Eureka Prizes are Australia’s most comprehensive national science awards, presented annually by the Australian Museum to reward outstanding achievements in Australian science.

Professor Wallace said his Eureka Prize acknowledged the pioneering work undertaken by his collaborative team, in the use of nanotechnology and additive fabrication in renewable energy and medical science.

“This award acknowledges the ability of ACES and its partners to take fundamental discovery to real applications,” Professor Wallace said. “It takes an integrated, cohesive and committed team to achieve this.”

“A great team can make most people look like a good captain.”

In his acceptance speech, Professor Wallace thanked the people he has worked with over his 30 years at UOW.

“Thank you to the hundreds of people I’ve worked with around this country, especially those at ACES and the Australian National Fabrication Facility,” Professor Wallace said.

“Thank you also to the community we work for. You can be assured that you have around this country, research scientists totally committed not only to discoveries in the lab, but to translating those discoveries to practical outcomes in the most effective and efficient way possible, so that we can all lead better lives.”